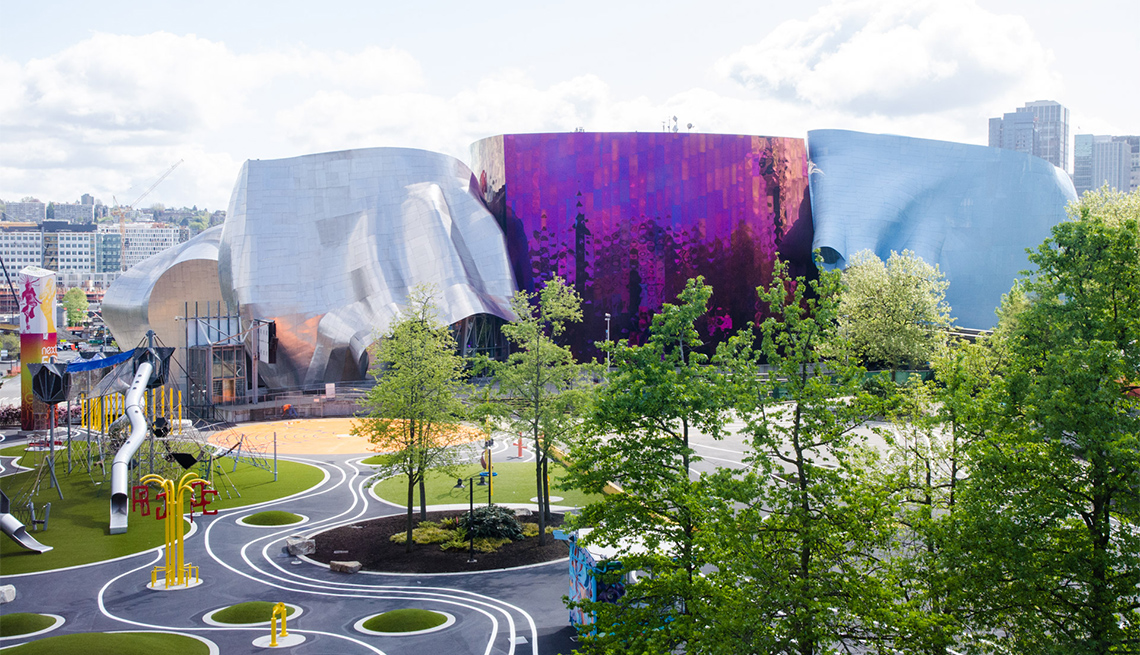 Geek chic Seattle has a long history of innovating and walking to the beat of a different drummer. Nowhere illustrates this better to visitors than the Museum of Popular Culture (MoPOP) at Seattle Center, 1.5 miles northwest of downtown. Created by Microsoft co-founder Paul Allen, it celebrates iconic moments in animation, games, music, sci-fi, television and other genres often overlooked by canon. His mission ? To â€œmake creative expression a life-changing forceâ€.

California starch maker Frank O. Gehry set out to blend the energy of hot rods and rock ‘n’ roll here in his first Pacific Northwest design. The structure shines with 3000 panels of stainless steel and aluminum shingles in psychedelic tones. It contains as many structural elements as a 70-story skyscraper and required software invented to develop French fighter jets. The daring building caused New York Times’ critic Herbert Muschamp to grab his pearls, claiming that it “looks like something that crawled out of the sea, spilled over and died”.

â€œIt’s a work of art in itself,â€ says Jacob McMurray, director of conservation, collections and exhibitions. â€œSome galleries do not have straight ceilings or walls. The experience of the building is kind of a fantastic journey.

No other piece of architecture in Seattle reaches this level of bizarre and unique. It looks like the perfect shell for what we do on the inside. Also, how cool is the [Seattle] the monorail crosses it? â€

The museum’s original history dates back to 1967, when the experience Jimi Hendrix and Seattle-born band frontman first captivated Allen. But the ambitious project didn’t get off the ground until 2000. True to the tech industry ethos of â€œget out early, get out oftenâ€, MoPOP has undergone five mind-boggling brand changes over time. evolution of its objective. Today he celebrates everything from tattoos to horror props, Minecraft, Nirvana, Pearl Jam and The Wizard of Oz, and incorporates lessons, recording booths and performance areas

Highlights you’ll want to see include the Church of Heaven, named after Hendrix’s vision of an open-air place where people of different beliefs, colors, and experiences could come together and commune together. MoPOP’s take includes lighting from a 33 ‘x 60’ high-definition LED display, supported by world-class lighting effects and acoustics. â€œIt’s such a striking place,â€ McMurray says. â€œWe organize concerts and fashion shows there. Events, too, like campsites. When David Bowie passed away, we showed Labyrinth. People brought their sleeping bags and we had drink specials.

â€Nostalgia can lead visitors to big reactions, like crying when they see the guitar that Hendrix played in Woodstock. Others are overwhelmed when they see their enthusiasms – like the Disney costumes – taken seriously. And sometimes guests send enraged emails because “Nirvana is not punk rock, this is grunge” or “Star Trek is much better than Star Wars”.

McMurray smiles. ” I love that. What better space to be than having people passionate about your content, even if they are pissed off? The worst part would be if they were just like, ‘OK, man, whatever. “

Director’s advice: McMurray says don’t miss â€œIf 6 Was 9,â€ a â€œtornado-crazedâ€ kinetic sculpture of some 700 instruments, 40 of which combine into one playable instrument – essentially a Voltron guitar. “It is a major piece of contemporary American art,” he notes, from Seattle-based sculptor Trimpin.

Getting There : Park across the street at the Seattle Center 5th Avenue N garage (516 Harrison St.). In addition, 18 bus lines serve Seattle Center, as does the monorail.

Visit: Thursday-Tuesday (closed Wednesday); 10 am-5pm (also closed Thanksgiving, Christmas Eve, Christmas and another day in December for the annual benefit of the museum)

Best time to visit: From the end of the morning to the middle of the afternoon on weekdays, avoiding the peaks of commuter traffic in the city center

Best season to visit: If you’re a bit scared, aim for the third Friday of the month, when MoPOP hosts its horror movie series to watch, It’s Coming From Inside the House, from January through October. A late spring festival also presents short sci-fi and fantasy films every year.