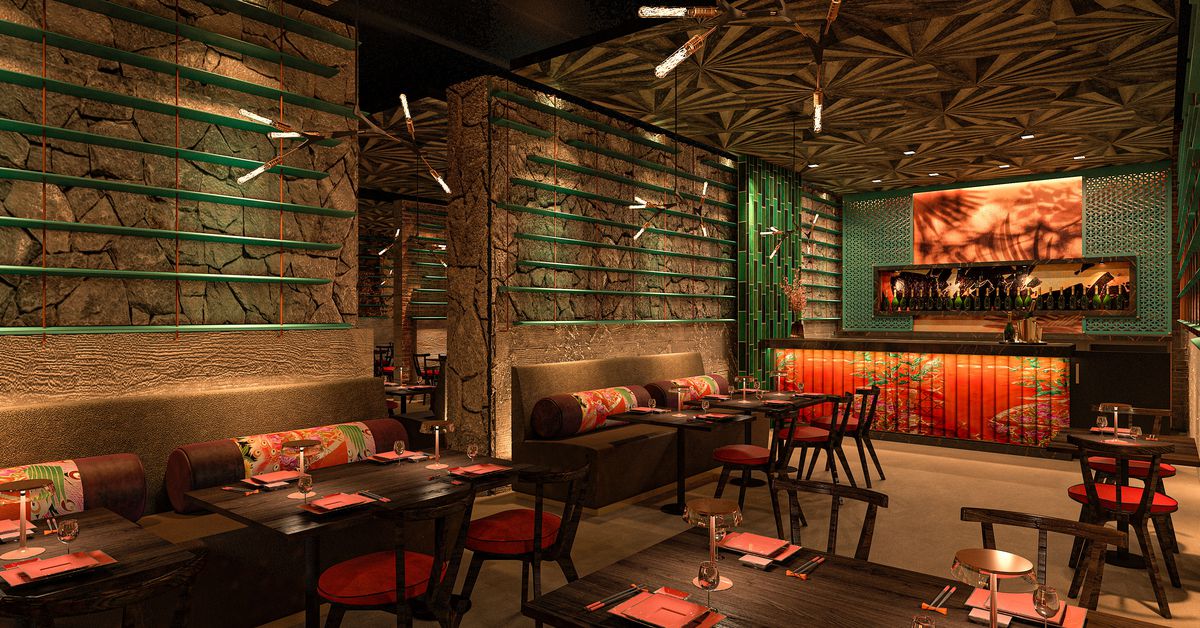 The team behind Yume Sushi, out-of-Arlington’s favorite raw fish, is expanding across state lines in early 2023 with the opening of an opulent new flagship at an iconic address in Georgetown.

Nestled inside the mixed-use tony cluster of Cady’s Alley, Kyojin breathes new life into L2’s former home – a neon-lit cave-like living room that enjoyed a scene for much of the 2000s (3315 Cady’s Alley NW, Suite B).

The 4,700 square foot hidden gem on M Street NW will get a luxurious new look from Francois Frossard Design, the Miami-based studio behind the South Beach Story nightclub and other high-profile hotel projects from Paris to Dubai.

At four-year-old Yume, executive chef and co-owner Saran “Peter” Kannasute experiments with offbeat flavors like lavender smoked salmon, monkfish liver, truffle wasabi and uni with torched wagyu behind a counter at stylish sushi framed by a graffiti-splattered geisha mural. At the 130-seat Kyojin, the Bangkok-born chef has more room to lean on the boundary-pushing sushi and omakase menus he’s known for. Izakaya Hot Deals will be a new feature in Kyojin.

The maze-like windowless layout will also make room for a sushi bar and sake tasting counter. A reservation-only omakase experience called The Counter DC will go live in the spring.

“Kyojin represents a dream of all of us: to expand our vision and bring Chef Kannasute’s world-class Japanese cuisine to new audiences,” said Jeff King, co-owner of Yume Hospitality Group, in a statement. He says the team has been monitoring Georgetown and the empty L2 space next to Kafe Leopold for a while.

Like Yume, Kannasute will steal fresh fish from Japan overnight and slice seafood the day it is served.

DC vet mixologist Andrew Lamkin, who recently ran the bar at the Graham Hotel in Georgetown, will create unexpected cocktails with Kannasute’s menu in mind. The bar will also be stocked with a wide selection of selected sakes.

Kyojin means “giant” in English, but the Zen redesign strives to “create a very intimate environment”, says Frossard, who is also a partner in the project. Think: warm, indirect lighting and a color palette that’s inspired by a Japanese wedding kimono, he says.

Kyojin is the latest sushi staple to enter DC, starting with the expected arrival this year of modern Japanese izakaya Shōtō at Midtown Center.


Register to receive the newsletter

Yorktown Board lays down a welcome mat for boutique hotels