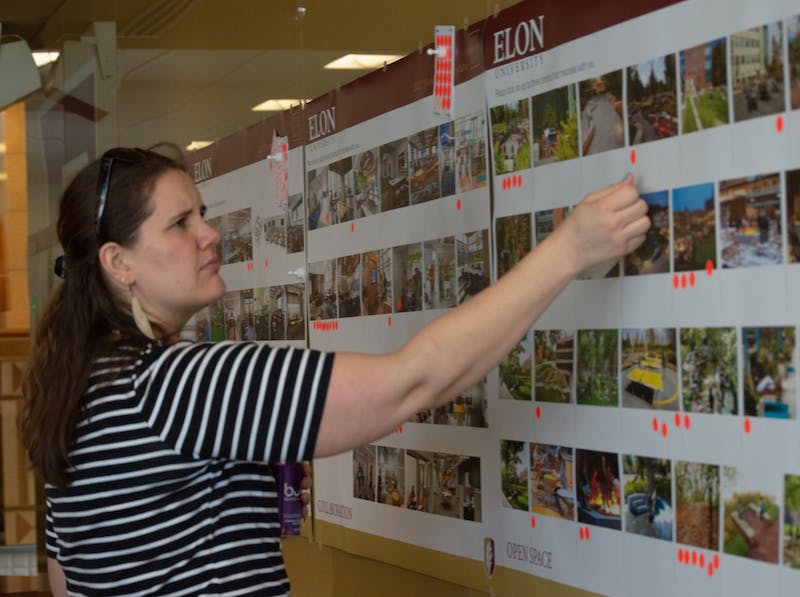 Members of the Elon community were in attendance and shared their thoughts on how the campus should develop during a town hall discussion on March 22. Held at the Moseley Student Center, the discussion aimed to review the university’s current master plan.

The public assembly included representatives of Ayres Saint Gross, an architecture and urban planning firm that guided the development of the current master plan. University architect Brad Moore is a member of the long-range planning committee and said City Hall was designed to see what areas future development will focus on.

“It’s interesting to hear feedback from students about places they really like, places that don’t work for them, and to really hear why they’re there,” Moore said.

the the master plan has been adopted by the Board of Trustees in 2016. It was developed according to the following campus strategies: preservation of ecological assets, expansion of the mixed-use campus core, clarification of the road network, extension of the network of open spaces, reinforcement and connection of neighborhoods devices and support for a dynamic downtown Élon.

Many of the projects outlined in the current plan have already been completed. These include the Schar Center, Koenigsberger Learning Center, Sankey Hall, East Neighborhood, LaRose Student Commons, and South Gym. It also includes the expansion of the McEwen dining room and the Innovation Quad parking lot. The first two buildings of the Quad Innovation are nearing completion and should be done this fall.

The Town Hall contained different maps where community members could place stickers on areas they liked, areas they wanted to see upgrades to, and images of areas such as study spaces they would like to see built. in the future.

“There are a lot of students interested in outdoor wellness opportunities, whether it’s classrooms or walking trails, and it’s a real variety, do they like enclosed spaces or things like that,” Moore said.

One of the areas that students had negative feedback on was the East Ward. Moore said he was interested because it’s one of the newer areas of the university, but the comments come from a lack of dining options within walking distance.

Other improvements community members would like to see are renovations to the Arts Centre, the Belk Library and the College Street tap. Regarding faculty and staff changes, a separate fitness center specifically for faculty and staff and more centralized office space for senior staff members were requested.

The students also wrote that they wanted designated parking lots where they could park and not receive a ticket. Exterior renovations were the majority of the changes requested, with several members requesting more outdoor seating, more hammock poles by Lake Mary Nell and walking paths.

Freshman Giuly Zegarra said she enjoyed her on-campus experience in the Colonnades neighborhood and said she wanted better lighting on the walkways.

“When I walk to dinner sometimes, I feel like there might be more lighting because I might trip or something,” Zegarra said. “It will make me feel a little safer if there were more lights.”

Moore said one of the updates that will happen in the near future will be the walkway connecting the Colonnades neighborhood to the Danieley Center. The pedestrian path would connect the two neighborhoods so that students would not have to walk between cars. The walkway, two outdoor classrooms and other outdoor living spaces on campus will be built this summer.

“I’m really excited to build that connection to really help them feel part of our campus,” Moore said. “I think it will be a big change for these residents.”

Today’s information and new information from senior staff will be incorporated into the current update, according to Moore. The update of the master plan should be finalized at the end of the semester.

HOME OF THE ORIGINAL NEW YORK PIZZA PARTNERS WITH DAILYPAY