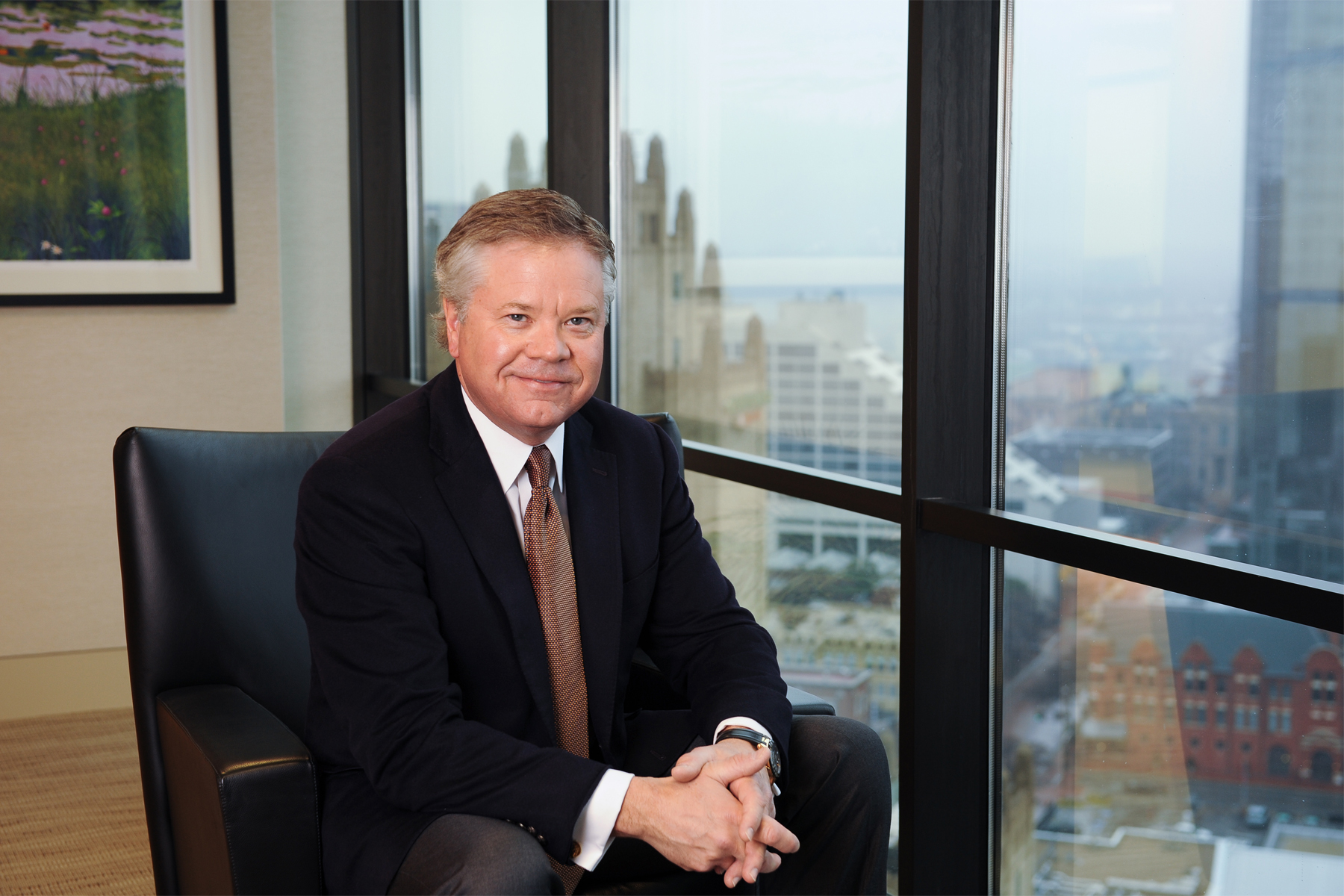 John Goff, who is 66, jokes about getting old. “Not old – vintage,” he tells me, as we settle in to discuss his career. It’s been fascinating, filled with bold moves and big rewards. He spent the early years on a ho-hum accounting track; things got interesting after he went to work for famed Fort Worth investor Richard Rainwater. One of his first assignments was to put $50 million to work in the stock market after it crashed in October 1987. “Why he did that, I don’t know,” Goff says. “But for some reason he believed in me.”

Soon after, Roger Staubach contacted Rainwater for help with some real estate investments he had made. The rainwater put Goff on the spot. “What I finally saw was that Roger had this very small but interesting business in tenant representation,” Goff says. “I ended up negotiating with him to buy 20% of the business for $1 million. That million dollars ended up being worth over $70 million. was all Roger and his team, they did a wonderful job.

It was a worthwhile investment, but the insights Goff gained from serving on The Staubach Co.’s board of directors spurred an even greater return. Because of the company’s focus on tenant representation, he was able to see where companies were moving and why. “I thought, ‘Wow. All these companies are moving to Texas, which is the most oversized market in the country,’” Goff recalled. “Why don’t I build a real estate company around this? ‘wouldn’t I buy real estate because anything and everything was for sale?’ He presented the idea to Rainwater – a business plan drawn on a single sheet of yellow paper. looked and said, “That’s great. I’ll help. I’m going to invest some money in it, but you’re putting all your net worth into it.”

“I started with nothing,” says Goff. “When I went to work for Richard, I had no net worth. But by then I had created single-digit millions – let’s call it $5 million in net worth. I worked my tail to get this point; I never thought in my life that I would even be worth this amount. Putting it all on the line was very hard to do.

“How long have you been thinking about it? I ask. He doesn’t hesitate before answering: “Two seconds.

Much of Goff’s success over the years has been due to his willingness to trust his instincts and take risks. His first real estate deal was with Caroline Rose Hunt, who was looking to recapitalize her Uptown development, The Crescent. After this 50-50 partnership, Goff made additional purchases, focusing exclusively on Class A buildings. He also began building a team, some of which remain with him today. In 1994, Goff took the company public with a $500 million IPO. That’s when his business was given a name, Crescent Real Estate Equities, in honor of his first purchase and favorite property.

In 2007, Goff sold his company to Morgan Stanley for $6.5 billion, having built up a $4.5 billion portfolio of offices and hotels that were sold at a profit of $3 billion. Two years later, in a remarkable turn of events, he bought it back – for a fraction of what he had sold it for. “Morgan Stanley had put a lot of leverage into it, and that leverage came from Barclays Bank,” Goff says. “Barclays called me and said, ‘Do you want your business back?’ I said, ‘Sure, but you’re not going to like the price.’ It was like catching a falling knife back then – how the hell do you value something? [Due to the economic downturn of 2008], the world was upside down. Barclays eventually agreed to a partnership, which remained in place until Goff bought the lender in 2016.

Today, he says, Crescent is a $10 billion real estate deal. Goff is president; two CEOs, Jason Anderson and Conrad Suszynski, oversee day-to-day operations. Goff is also chairman of his family office, Goff Capital, managed by his son Travis. (His other son, Christopher, is chief investment officer for Crescent.) It turns out that Goff’s knack for making smart investments goes far beyond commercial properties. Through his family office, he has tremendous holdings in the energy, entertainment, aerospace and technology sectors. “People always refer to me as a real estate agent, which is good. And that’s how I originally created most of my wealth,” says Goff. “But today when you look at it, I mean, we have investments of all kinds.”

On a tear of development

When it comes to choosing where to place his bets, Goff says he likes to find things that “everyone hates. “It means buying when things are oversold and undervalued. The risks are enormous, but Goff has repeatedly demonstrated his willingness to tolerate them. When he acquired The Crescent from Rose Hunt, he also bought the acreage she owned around it, at a time when Uptown was just getting started. This led to the development of the Ritz-Carlton Hotel and Residences, the notable McKinney & Olive office building, and the newly opened 2401 Cedar Springs, another office project.

His latest venture is another marvel, a mixed-use development in Fort Worth’s cultural district that currently bears the name Crescent Fort Worth. “I pass the site every day on my way to work,” says Goff. “And for years I was like, ‘Why can’t someone take this property and do something with it? It’s the perfect place. Finally, I said, “We have to do this. So we did.

Currently under construction, the development is expected to open in the spring of 2023. In addition to 166,000 square feet of office space, the project will include a 200-room luxury hotel, an upscale restaurant and 170 upscale residences – “the city,” says Goff. It will also house a Canyon Ranch urban wellness center, an offshoot of his Canyon Ranch resorts (see box). The headquarters operations of Crescent Real Estate, Crescent Energy, Canyon Ranch and Goff Capital will occupy approximately one-third of the office building.

In total, Goff currently has approximately $2 billion in development projects underway, including two hotels in Nashville, a multi-family development and an office and retail project in Denver, and others in Boulder. He is also developing again in Dallas, an apartment building on Maple Avenue near The Crescent. “We’re very, very busy,” Goff said. “We have a lot of projects, a lot of things planned that we haven’t announced.”

For both development and investment, he focuses on high growth real estate markets. “We are interested in where people are moving and not,” he says. “We love Colorado, we love Florida and obviously we love Texas.

“I have never seen better market conditions for real estate in North Texas, ever. It’s as good as ever,” adds Goff. “We have real and significant demand. We are going to benefit from immigration like never before. I built Crescent on immigration in the early 90s, but that has nothing to do with what we see now. There is probably no better market in the country.

John Goff has been named the Pioneer Award winner in the D CEO’s 2022 Commercial Real Estate Awards program. This singular honor recognizes leaders in the region who have had a profound impact on the region and the profession.

Goff moved to Fort Worth in the early 1980s and took a job with what is now KPMG. It was there that he met Richard Rainwater, who was the Bass family’s chief investment officer. When Rainwater left the Basses to pursue his own interests, he asked Goff to join him. “It was completely life changing,” says Goff. “Our relationship over the years was everything from father-son to brothers to business partners. It has evolved, but we were very close. He was inspiring. He saw things in me that I had never seen, abilities that I didn’t know I had. Richard didn’t sit you down and teach you things – that’s not how he worked. You had to learn by osmosis. You had to imitate and just observe and, as I often say, “hang around the hoop”. It was a small office, but there was a lot of talent – over the years it was Eddie Lampert, Ken Hersh, Rick Scott, Mort Meyerson and George W. Bush, among others. It was an amazing place to be.

Goff took a stake in Canyon Ranch in the late 1990s. In 2017, he acquired the luxury and wellness resort brand from Mel Zuckerman, who founded the company 40 years ago. “The brand is more relevant today than it has ever been because wellness is more relevant today than ever,” says Goff. I think we have a real responsibility to take what is a great formula and expand it, in a very thoughtful and very careful way. I have already booked a property near Austin. We have a new CEO, Jeff Kuster, who joined us two years ago. He is fantastic.

We brought in some amazing young talent who bring a lot of vigor and great new ideas. … We are really looking to grow; we will create urban wellness centers and add more resorts. We are also reinvesting even more in our current stations. So look for plenty of growth in Canyon Ranch. I think Canyon Ranch can be bigger than Crescent ever was.

Deal of the Year: The Crescent

Goff’s acquisition of The Crescent in March 2021 marks the third time he has owned the iconic Uptown property. He reportedly paid a record $700 million for the asset. Along with 1.1 million square feet of office space, it includes the Crescent Court Hotel, 11 restaurants, high-end boutiques and more. It was one of the most expensive projects ever built in Dallas when Caroline Rose Hunt developed it in 1986. “She had a vision and took a huge risk to build it in a market that didn’t really exist” , says Goff. “It’s really the anchor of Uptown, which has become the best market in the whole Southwest, certainly in Texas. I never want to resell The Crescent again. I love it. It’s too hard to find great iconic assets like this. So I think we will own it forever.

Stay up to date with DFW’s rapidly changing business community with weekly features, interviews and news.

Christine is the editor-in-chief of CEO magazine and its online platforms. She is a nationally award-winning business journalist who has…