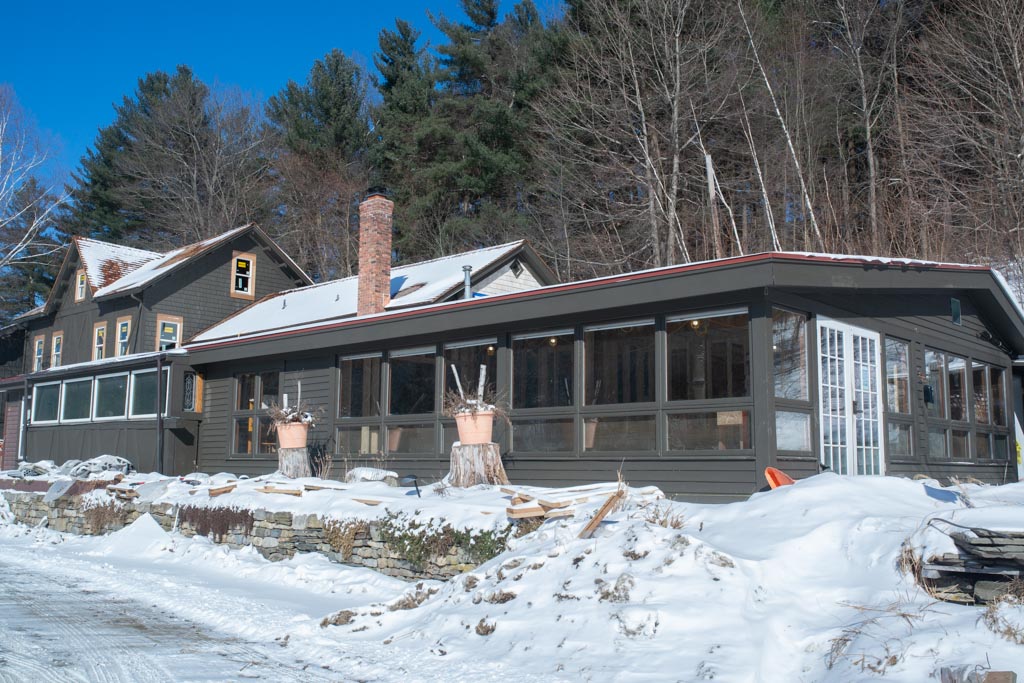 Little Cat Lodge will open in April near Catamount

Rumors are swirling around Hillsdale – and beyond – that the highly anticipated Little Cat Lodge, formerly Swiss Hutte Inn and Restaurant, is set to open. It’s almost true.

“We’re aiming for April, kind of an early to mid-spring opening,” says co-owner Noah Bernamoff. He and his partner Matt Kliegman noticed onlookers walking past the property.

“People are sticking their faces to the windows,” Kliegman adds. While they’re glad the community is excited to see what they’ve done, and their website is live, they’re not letting anyone in – yet. “We’re not close enough to a soft launch. It still looks like a construction site.

The duo, who own and operate Otto’s Market in Germantown, as well as numerous locations in New York City (Grand Army, The Jane Hotel Ballroom & Rooftop, Celestine, Black Seed Bagels, and soon-to-open Pebble Bar) were quick to work. When the doors open to the restaurant and 14-room hotel –– 12 standard and two large two-bedroom suites — here’s what they say to expect.

First, there is the new name. Bernamoff’s wife, a brand strategist, helped. “We went through a lot of names. We felt like this one captured the essence of what we’re trying to do: to have a place that’s accessible to families, non-families, children and young adults,” Kliegman says.

“Cat is obviously Catamount. I think Little Cat was the name of an old ski club there many years ago,” Bernamoff adds.

Within the nearly 100-year-old, 7-acre property, the buildings have been completely renovated, although there are areas that will be familiar to old-timers. The bar area remains the bar area, but with much higher ceilings, for example. “We have always wanted to retain the feeling of being in an alpine mountain environment. So I would say the vernacular will be colloquial [but] everything will be different,” says Kleigman.

New windows and a new cedar shingle roof adorn a building. “We started making choices to add to the beautification of the property that we hadn’t planned on doing when we started,” he adds. With all the changes at their neighbor Catamount – new lodges, new lifts, added trails, expanded snowmaking capabilities – they felt inspired to make their space just as fresh.

“They want to make it the best small family mountain in the region. We want Little Cat to live up to those goals,” says Kleigman.

The partners brought in designer Loren Daye of Love is Enough for the interiors. The colors are meant to evoke woods and nature – greens and browns, some of them quite dark. Wood is used in all spaces. “We use trees that Catamount used to fell and saw for lumber. [them]. There are 2,000 linear feet of maple and red oak that we use to build various pieces of furniture.

The rooms are dark green with walls partially finished with mushroom wood, a substrate wood once used for growing mushrooms, ground into planks. “It’s a durable, reusable and recyclable material that we use in all of the rooms,” says Bernamoff. The bedroom floors are white oak with a clear clear coat.

The bar area features a quarry tile that resembles terracotta in a chevron pattern. “It’s a very natural feel, with tactile materials throughout. We want the space to feel really nice against your hands. We don’t want him to feel sterile. It’s not a cold, modern feeling,” Bernamoff says.

In addition to the 70-seat restaurant and 45-seat bar, there will be a three-season pergola structure next to the dining room that can accommodate another 24-28 people outside. At the front of the building, a casual outdoor lounge will accommodate an additional 20-25 people. It’s their offer to local friends who have requested a ‘real après-ski experience, looking at the mountain, sitting outside with a hot chocolate or a hot toddy. It’s something quite unique in the region,” says Kliegman.

It is not yet known what will be served in these spaces. The partners have plenty of ideas, but the menu won’t be planned until they find an executive chef. “Swiss Hutte was very Swiss and Germanic. Our goal is to be a broader alpine cuisine and not strictly Swiss,” says Bernamoff.

They envision alpine cuisine from multiple regions like France, Italy, and Slovenia with what Bernamoff calls “local fresh Hudson Valley-Berkshire” seamlessly integrated. But these are just concepts for now. Whoever fills the role of chef will define what that means on the plate.

So far, Bernamoff and Kliegman say they haven’t encountered any problems in the hiring process. Manager-level openings often bring in serious people. But as many hotel businesses in the area know, hiring servers, cooks and housekeepers in March, when they ramp things up, could be slower.

“I’m sure there are still many more challenges ahead,” Bernamoff said. “We’re off to a good start”

More trips to the Hudson Valley

THE LEELA PALACES, HOTELS AND RESORTS LAUNCHES A SIGNATURE FRAGRANCE WITH THE LAUNCH OF “TISHYA BY THE LEELA”

My 5 favorite hotels to discover in Yountville