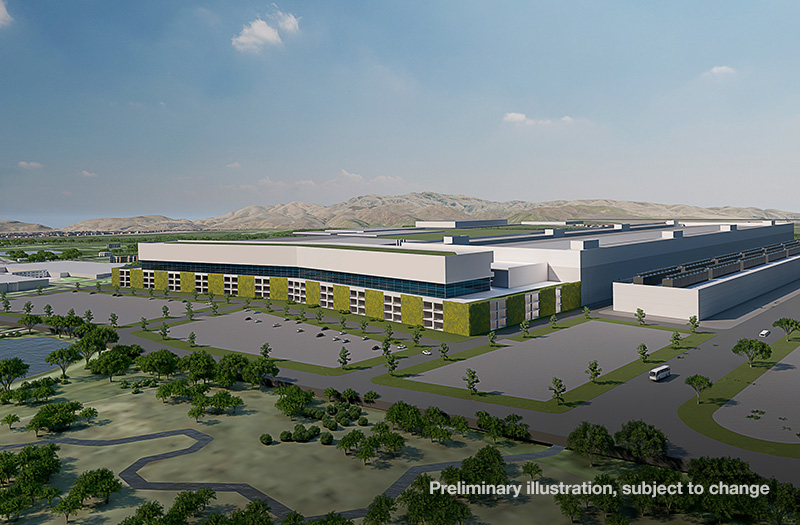 Micron Technology has filed the first round of permits for the planned large-scale expansion of its Boise headquarters. The plan includes a dizzying array of new buildings and features to support its plan to bring semiconductor manufacturing back to the United States.

In total, the plan would add more than 6.5 million square feet of space to the site – about the size of the Pentagon.

To achieve this, Micron will need several permits. For starters, he will need to annex additional land he owns within the city limits of Boise. The land sits on what the city calls the Columbia Bench — the area south of Idaho 21 and roughly north of Interstate 84 in southeast Boise. Micron also hopes the city will give him approval to rezone a strip of land.

A conditional use permit application for campus expansion details a significant number of new buildings or an expansion of existing buildings.

The biggest, by far, is the planned new “fab” – short for manufacturing plant. The building will rise four stories and comprise 4.85 million square feet of space. At 160 feet tall, it would be about as tall as the downtown Idaho Power building.

Although there is no reliable record-keeping source, it would likely be the largest building in the state of Idaho. Amazon’s fulfillment center in Nampa, for example, is about half the size at 2.65 million square feet. The Amazon Nampa building occupies approximately 650,000 square feet on the ground floor, while the Micron factory is 1.2 million on the first floor alone.

“The size, scale and complexity of the plant requires many new employees and supporting facilities to operate,” Micron facilities architect Paul Marcolina wrote in an application letter. “To support the fab, we will add office, manufacturing, administrative and utility facilities.”

The building will include 600,000 square feet of cleanroom space – a controlled area for low airborne particulate matter used in semiconductor development and production.

At a groundbreaking ceremony last month, Micron said the Boise cleanroom would be the largest in the United States. However, he said later it would build 2.4 million square feet of cleanroom space in a separate New York expansion.

While the fab is the star of the show, the rest of the expansion adds significant new facilities to the already sprawling Boise campus.

A new administration building would parallel Federal Way and be located near the plant. The plan calls for a large podium-style car park on the lower levels, which can accommodate 3,600 cars. By comparison, the Capital City Development Corp. operates six public parking lots in downtown Boise, which together include only 3,179 parking spaces.

Beyond the large parking lot, the building will have office space, as well as a wellness center and a fitness center. It will include 440,000 square feet of space.

This building is separate from a project that BoiseDev told you about in August build a new “world-class” office building elsewhere on campus.

Construction of the probe

Parallel to the administration building and connected by a courtyard is a structure that Micron calls the Probe building. It will be 365,000 square feet in size and will also connect to the FB, as well as another nearby building via an air bridge.

“The upper floor of the probe building is primarily a clean room space (approximately 85,000 square feet) where the final stage of the wafer fabrication process, functionality testing, is completed,” Marcolina wrote.

On the lower floors of the probe building, Micron is planning additional offices, a cafeteria and other uses.

An existing manufacturing building, which Micron calls B51, will add 92,000 square feet of space.

“We will expand our existing TD wafer fabrication facility to include an automated material handling system that will automatically transfer wafers produced onsite to the probe facility for testing and ultimately to the FAB for microchip fabrication,” wrote Marcolina.

This extension of the building will connect to the Probe facility and ultimately to the new factory itself.

Just north of the plant, Micron will construct a new central utility building. Covering 450,000 square feet, it will include support systems that the company says will help run the plant and “power manufacturing and manufacturing processes such as boilers and chillers.”

A new tall gas plant will be built and the City of Boise will have to sign a height exemption for a new tall structure.

“Semiconductor manufacturing requires high purity gases,” Marcolina wrote. “The gas plant will use two gas columns and cold chambers to separate gases like oxygen and nitrogen from ambient air for use in the FAB. For the gas plant to operate, the columns must have a height of about 185 feet.

The columns will be about as high as the Wells Fargo Building in downtown Boise.

Micron says it will operate its own water treatment plant on site.

Marcolina’s letter said they would use water from both the municipal water system operated by Veolia, as well as “on-site groundwater sources.”

“Water conservation and reuse is paramount and Micron plans to treat and reuse the majority of our wastewater onsite,” he wrote. “Any excess sewage will be fully treated before being discharged to the city’s treatment facility.”

A 22-acre portion of the campus will be converted to serve as an electrical yard. Micron says the facility will act as a substation and help meet the plant’s power needs. The company said the equipment will be operated by Idaho Power.

Micron’s expansion will require conditional use license approval, as well as annexation and rezoning. Hearing dates for the endorsements have yet to be set.

Micron said the project would be built by 2030.

7 eco-hotels in Mexico to save the planet

Your guide to visiting the Great Sand Dunes National Park