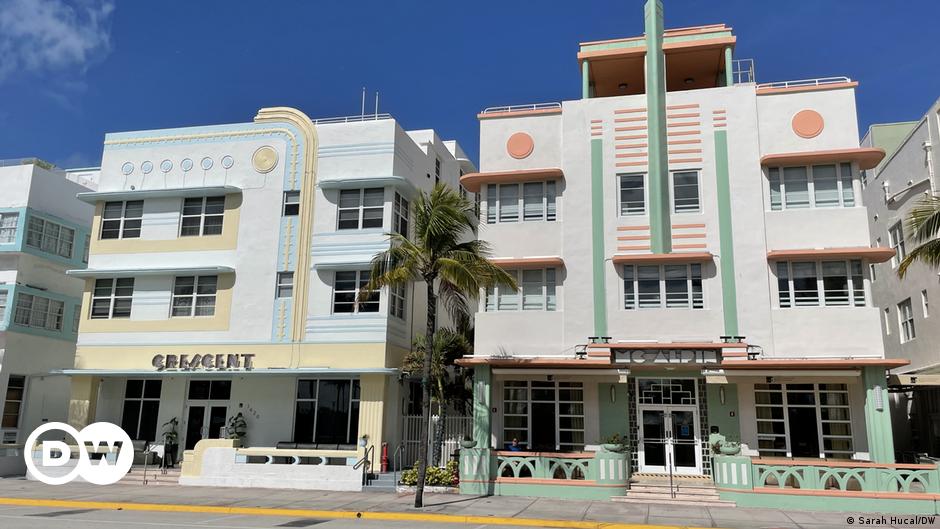 At the beginning of March each year, the area of ​​Miami Beach known as South Beach is full of college students in swimsuits. Music blares from loudspeakers in all directions and long queues form outside popular hotel bars. Miami Beach has long been a popular spring break destination. But spring break is only one part of Miami Beach, an island city in the state of Florida in the southern United States. The white sand of the beach (which comes from elsewhere) and the beautiful blue waters attract everyone.

There’s the middle-aged Midwestern couple frying like lobsters who’ve been waiting to see the sun all winter — and there’s over-the-top glitz and glamour, too. The five-star Hotel Faena has a lobby decorated with gigantic golden columns and a dimly lit bar where a jazz band plays. Entrance seems to be mostly allowed to women with designer handbags and high heels.

Tacos are plentiful, as are Cuban restaurants – you can speak Spanish instead of English pretty much everywhere. After all, Miami not only has a large Cuban population, but is also home to people who have immigrated from all over Latin America.

The island, which was once covered in mangrove forests and teeming with crocodiles, was designed from the start to be a vacationer’s paradise.

Tourists flocked to Miami Beach in 2021, and they’re still arriving. As of April 10, 2022, the number of hotel rooms sold in Greater Miami was up 18% from the same day in 2019, according to the Greater Miami Convention and Visitors Bureau. At the height of the pandemic, Florida’s Republican governor imposed few restrictions, meaning when other states across the country were in lockdown, Florida was wide open for business. Tourist numbers in the second quarter of 2021 were already at pre-pandemic levels.

Mark Gordon, longtime staff member of the Miami Beach Design Preservation League, said a year ago there were just too many tourists. “You had what I called the perfect storm – vaccines had just been introduced, people had been locked down in the North, hotels were empty and we were an open state.” 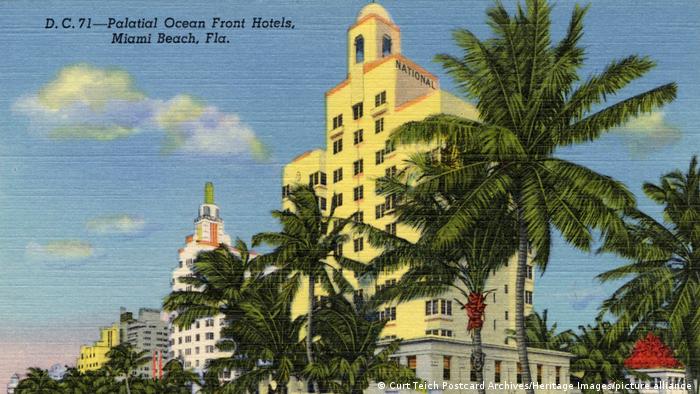 Miami Beach’s architecture has long been one of the city’s attractions, as shown in this 1941 postcard

Parties aside, Miami Beach has the most Art Deco buildings in the United States. More than 800 colorful structures built between 1923 and 1943 have listed Miami Beach on the US National Register of Historic Places. The structures tell the story of the city, as told by guides on the daily Art Deco walking tour offered by the Miami Design Preservation League.

The city’s development is widely credited to automotive magnate Carl Fisher, who was determined to make Miami Beach a winter vacation resort for the wealthy in the North in the 1920s. He harnessed the power of marketing and its advertising campaigns featured women in bathing suits, “bathers” as they were known, giving the town a reputation for attracting beautiful women to its sandy shores. 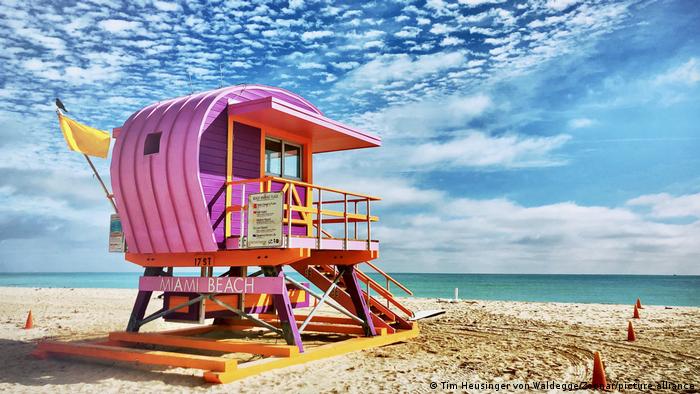 Miami Beach was designed as a resort town in the 1920s

In Fisher’s day, golf clubs and mansions were built in a known “Mediterranean Renaissance” architectural style with Venetian-style porticos and windows to trick people into thinking they were vacationing on the French Riviera. ‘Azure.

In the 1930s, the island attracted tourists to the town’s small Art Deco-style hotels, which sprang up almost overnight, despite the economic depression. The architects, some of whom were inspired by the Bauhaus movement in Germany, aimed to build low-cost, basic hotels that would be reminiscent of luxury and comfort. Some buildings even evoked images of cruise ships, as cruising was a luxury business at the time – the style is known as “Nautical Art Deco”.

“Tropical Art Deco”, meanwhile, emerged in Miami and featured ornate patterns and images of suns, moons and other symbols. 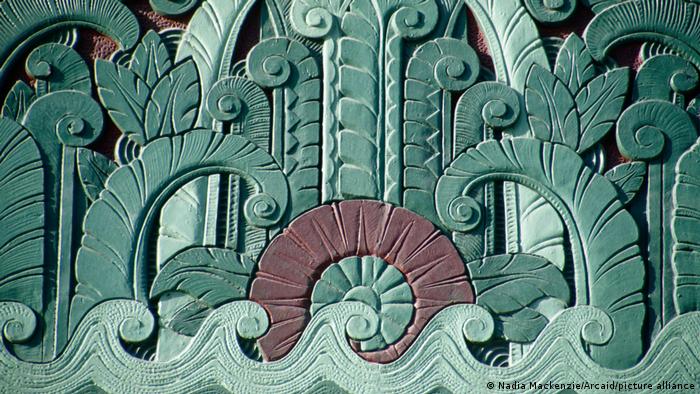 Some of the city’s Art Deco buildings feature intricate designs

However, the “vacationer’s paradise” also has a darker side. Its large elderly Jewish population, many of whom moved to Florida from northern states, has also been prone to anti-Semitism, beginning in the Carl Fisher years. 1960s that African Americans could actually spend the night in Miami Beach – previously they had to leave the island at sunset.

For a time, large parts of the city fell into poverty and disrepair. In the 1970s, the Miami Design Preservation League was founded by a group of activists who saw the architectural beauty of Art Deco structures – and the cultural and economic benefits of showcasing them. 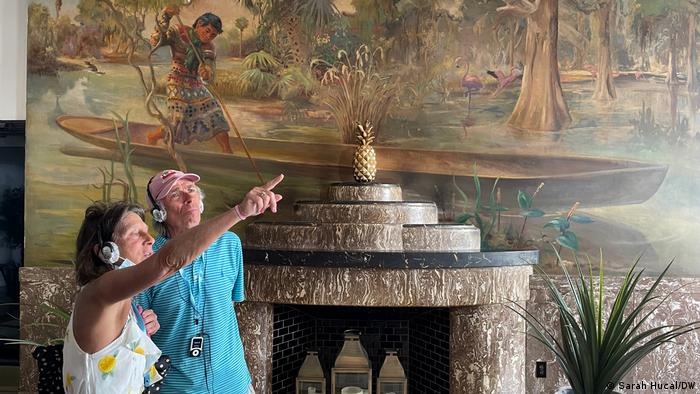 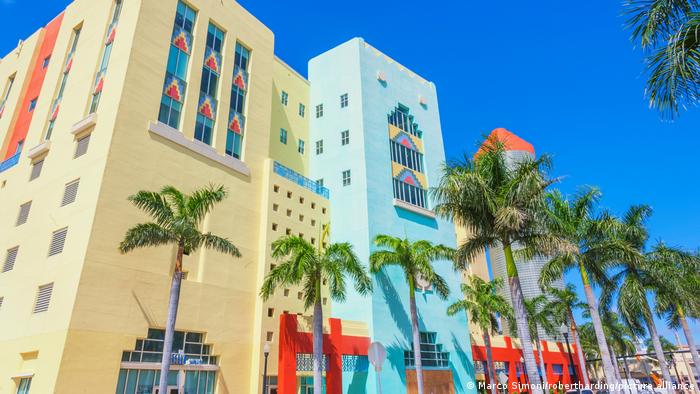 In recent years, Miami Beach has attempted to redefine itself as a cultural hub. Since 2002, Art Basel Miami Beach has attracted gallerists and contemporary art lovers from around the world every December. The city is also gaining a reputation as a cryptocurrency hotspot – the Bitcoin 2022 conference recently drew tens of thousands of people to the seaside town.

The historic architecture of the city also plays a role in the revamp. New York-based investment firm Infinity Hospitality is redeveloping a historic pedestrian street called Espanola Way. Originally, the street was intended to be an artists’ quarter. “By focusing on the historic roots of the street’s original vision, we, among other groups, are re-establishing Espanola Way as a cultural and arts district that speaks to locals and tourists alike,” said David Berg, partner at Infinity Hospitality. 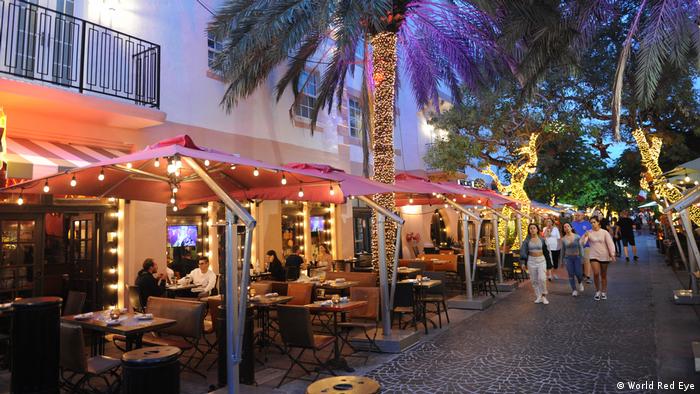 The group bought a budget hotel and transformed it into a trendy luxury hotel Esme, which has several bars and restaurants on site. Digital nomads are encouraged to spend the day working in the whitewashed passage called the paseo, giving the impression of being in a Spanish villa.

Berg points out that the pandemic has actually boosted tourism in Miami, noting that demand doesn’t appear to be slowing because “international travel, historically a major driver for Miami Beach, has yet to fully recover.”

Visit Dubrovnik? Here are the 10 best places to stay

The 3 Best Installment Loan Apps to Get You Started