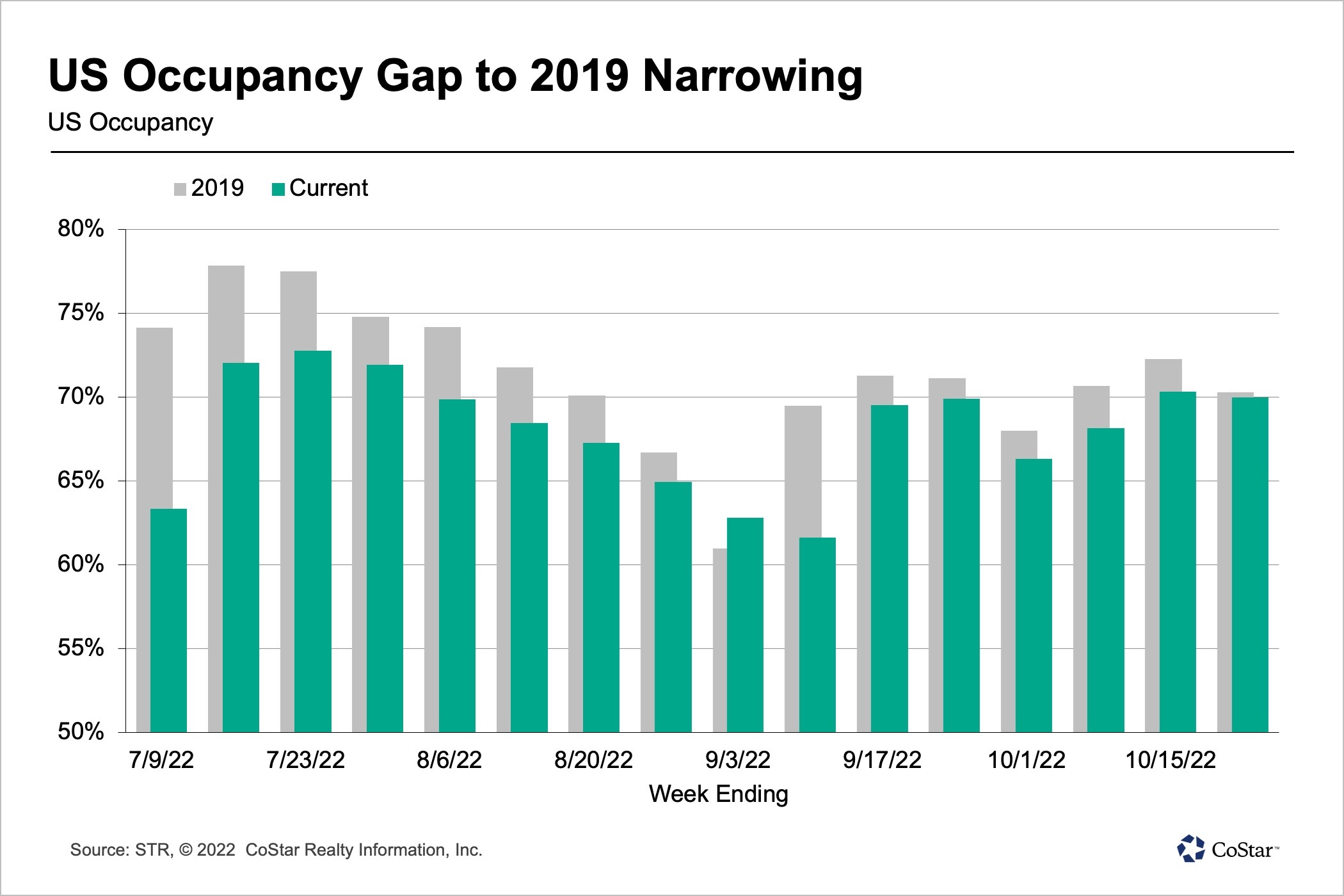 Peak fall travel season is likely over for U.S. hotels

Key U.S. hotel performance indicators fell slightly in the latest weekly data from STR, and history suggests the peak of the fall travel season has passed.

For the week ending October 22, the hotel occupancy rate in the United States fell 0.4 percentage points from the previous week to 69.9%. Occupancy over the past two weeks, however, has averaged 70.1%, exceeding 70% for only the seventh time in the past 23 years during this two-week period.

Demand for rooms – the number of hotel nights sold – in the current week and next is expected to fall more significantly as families stay home for Halloween, which falls on a Monday this year. In past years, with the same composition of days of the week, the demand for rooms has dropped by approximately 5% on Halloween week.

The slowdown in hotel performance is normal for this time of year. For the week ending October 22, demand fell by 142,000 overnight stays compared to the previous week. During the same period of 2019, demand fell by 755,000 overnight stays. Available rooms increased by 887,000 from 2019, and the U.S. hospitality industry sold 370,000 more rooms in this two-week period than in 2019, when occupancy was 1 percent higher. 1 percentage point.

Demand for hotel rooms from groups was the second strongest since the start of the pandemic, contributing to a week-over-week improvement in weekday hotel occupancy.

US Monday-Wednesday occupancy increased during the week to 69.4% from 67.9% the previous week. This is the highest weekday occupancy since late July.

Occupancy in the top 25 markets exceeded 75% for a second consecutive week. A week earlier, the group had reported its highest occupancy rate since the start of the pandemic at 75.3%.

Despite the strong performance, occupancy in the top 25 markets over the past two weeks was down 4.1 percentage points from 2019, and room demand also tracked 2019 and 2018 levels.

The weakness came from four of the nation’s biggest markets: Chicago, New York, San Francisco and Washington, DC, where demand was on average 12% lower than in the same two weeks of 2019.

San Francisco saw the largest demand shortfall, down 19% from 2019. However, nine of the top 25 markets saw higher demand in this two-week period than in 2019, including Atlanta, Boston, Miami, Nashville, Orlando and Phoenix. In total, demand for the top 25 was down 3% in the past two weeks compared to 2019. And, while New York was still in deficit, it had the highest occupancy rate in the country this week at 88.6%.

Occupancy outside the top 25 markets was 67.5% for the week ending October 22 and was nearly flat for the past two weeks.

The highest occupancy rate outside of the top 25 markets was recorded in areas affected by Hurricane Ian. Occupancy exceeded 86% in two Florida markets, Sarasota and Fort Myers. In Fort Myers, the occupancy rate rose 3.9 percentage points from the previous week.

Pandemic-era occupancy records were also achieved at luxury and high-end hotels, at 75.2% and 75.4%, respectively. Compared to the same week in 2019, the occupancy rate for both chain scales was lower by more than five percentage points, but this difference with 2019 is tending to decrease.

Upscale and upper-midrange hotels also reported occupancy above 70% for the week. The lowest weekly occupancy rate was in the economy chain ladder at 61%.

Over the past 28 days, 89% of all US hotel markets have exceeded 2019 levels in nominal RevPAR. Adjusted for inflation, 53% of markets beat 2019 levels, led this week by Sarasota. Overall, the top 25’s actual RevPAR was 8% lower than 2019, with San Francisco at the bottom.

Only seven markets were still classified as being in “recession”, with an inflation-adjusted RevPAR between 50% and 80% of 2019 levels.

Isaac Collazo is vice president of analytics at STR.

This article represents an interpretation of data collected by CoStar’s hotel analytics company, STR. Feel free to contact an editor with any questions or concerns. For more analysis of STR data, visit the data analysis blog at STR.com.

Deion Sanders answers a question about offers from top schools