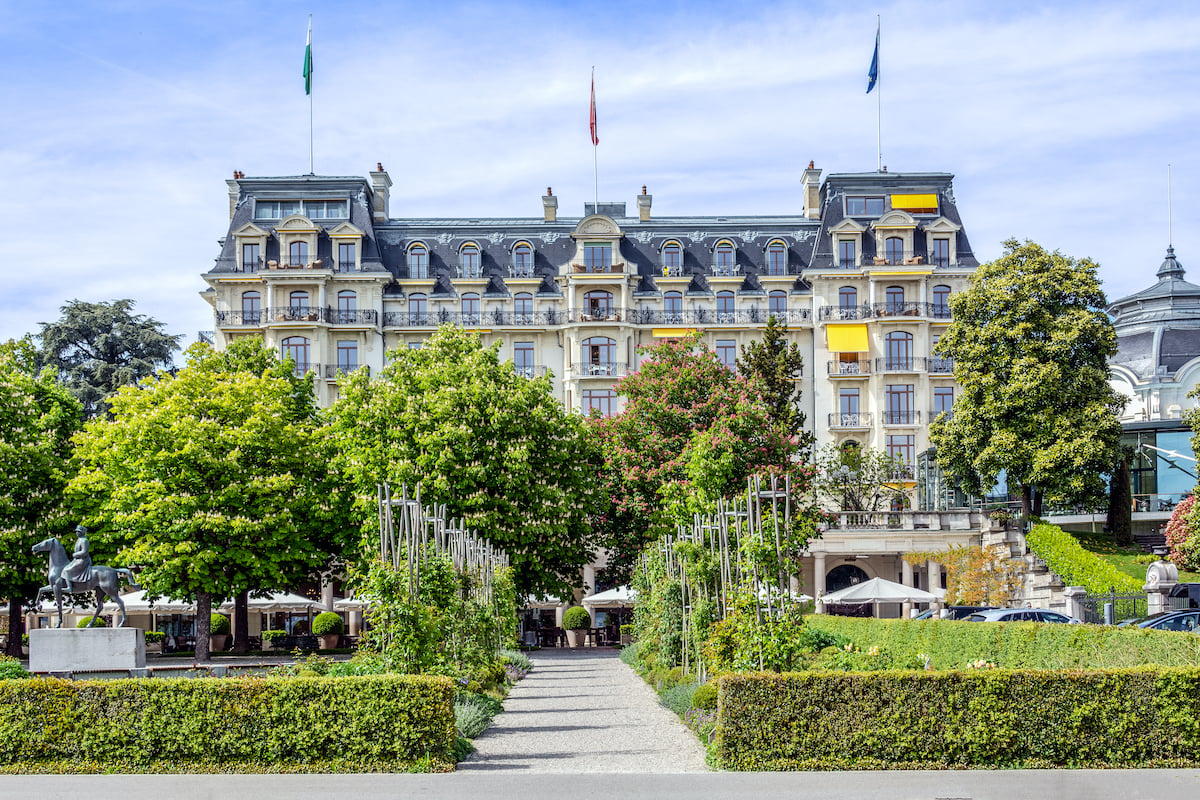 I have been a Paris-based travel writer and blogger since 2006 and have traveled extensively in France and Europe including Italy, Spain, Portugal, Malta, Norway, Czech Republic, England and Ireland . I have also stayed in all categories of hotels, from five star luxury hotel suites to quaint guesthouses and specialty boutique hotels. Most of them have been great experiences, but sometimes there is a hotel where the experience is unforgettable.

I was recently invited for a 2 night stay at the Beau Rivage Palace Hotel in Lausanne, Switzerland. I arrive at Lausanne station, and a hotel employee in a suit and tie is waiting for me on the platform with a sign with my name on it. We walked over to his car and once inside the five star experience had already begun. The sleek, glossy black Mercedes with beige leather seats glided effortlessly and almost silently through the rolling streets of Lausanne, while the courteous driver pointed out various points of interest in the city. A few minutes later, we arrived at the Art Nouveau entrance to the hotel with a curved glass canopy, green iron, and touches of golden architectural accents. It was seasonally embellished with scattered pumpkins and squash as well as pots of seasonal flowers.

I was warmly welcomed at the hotel and in Lausanne by the head concierge Sylvie Gonin and the communications director Maxine Willens. While my room was getting ready, Sylvie gave me a long and informative tour of the hotel.

The Beau Rivage Palace was originally built in 1861, and this year there are many special events to celebrate the 160th anniversary. Another major wing was added in 1908, incorporating the then popular architectural movement of the time, Art Nouveau. The two structures were connected by a gigantic dining rotunda with hand-painted murals. Sylvie showed me the private lounges and special event rooms on the ground floor and talked about some of the historic meetings and conferences that have taken place at the hotel over the past three centuries, including the signing the agreement to end the war between Italy and Turkey in 1912 and the Treaty of Lausanne in 1923. A hallway leading to one of the restaurants was lined with photos of famous guests from years past, including kings, queens, presidents, prime ministers, movie stars, singers and writers. I spotted everyone from Liza Minelli to French President Macron and Charlie Chaplin to Coco Chanel.

As we walked out, Sylvie explained that the hotel directly overlooks the majestic Lake Lausanne and the gardens and outdoor areas revolve around the lake view. The large heated pool looks so inviting that I almost took a dip. We toured the expansive multi-level gardens spanning 10 acres of lakeside property, which were beautifully landscaped with tall trees with fall foliage, manicured lawns, a tennis court, and delicate flower beds. The beer garden and lounge area feature an oversized chess set on the lawn and fun fruit sculptures by Brazilian sculptor Lisa Pappon.

It was already late afternoon when I got to my room. The beautifully appointed Junior Suite on the second floor is decorated in a neutral palette of soft beige, taupe, gray, and pale white. In front of the king-size bed with a leather-tufted headboard were two plush club chairs, one with a plush ottoman and a sofa. On a glass table, a bottle of local Swiss white wine, a homemade lemon coffee cake and a mouth-watering fruit plate awaited me, courtesy of the management. My favorite feature of my suite was the small outdoor balcony with two white wrought iron chairs. I spent the next few hours admiring the magnificent views of the lake and the French Alps beyond on the terrace while sipping a glass of wine and tasting the hotel treats.

The sumptuous bathroom has a marble bathtub, almost the size of my room in Paris, with a freestanding bathtub that intentionally faces the lake, colorful mosaic floors and a shower room with a bench and a handheld shower. rain shower. The toilet was in a separate room, which is generally the norm in most European countries. Next to the toilet on the wall was a remote control and I wasn’t sure what it was for. Curious to know, I pressed one of the buttons, and suddenly a jet of water started to shoot upwards, unexpectedly irrigating a certain part of the body.

The hotel booked that evening for dinner in its haute cuisine restaurant, Ann Sophie Pic Lausanne. Pic is the only female chef in France to receive three Michelin stars, and the hotel restaurant was quickly awarded two Michelin stars after it opened in 2009. The elegant lake-view restaurant has comfortable benches and tables for dining. more intimate meals. The wow factor is the artful presentation where the dishes are adorned with imaginative garnishes and the carved porcelain plates and bowls have unusual shapes. I asked the waiter for advice on which dishes to select and she recommended the chef’s signature dishes. A starter of delicate ravioli stuffed with chanterelle mushrooms and a selection of other seasonal mushrooms in a broth infused with Japanese whiskey and tonka beans was sensational. The main course of lamb, raised in the nearby Alpstein mountains, with roasted figs and fig leaves, was tender and tasty, and the dessert of white square-shaped millefeuille with white clouds of meringue Sweet surrounding has a light Tahitian vanilla creme and a touch of jasmine jelly. The delicious appetizers served before and between courses were also noteworthy.

On December 2, 2021, to celebrate the hotel’s 160th anniversary, Ann Sophie Pic is reconstituting a five-course menu from 1861 with assorted food and wine pairings, limited to 120 guests.

As I was pampered and so well fed, the next day I just wanted to relax and enjoy all the hotel amenities and attractions. However, the hotel arranged for a city tour with a private guide so there was a chance to be a lazy sloth. The tour was a wonderful introduction to the city, and we climbed the narrow, hilly streets of the Old Quarter with ancient buildings from the 1300s and 1400s.

Most impressive was the Lausanne Cathedral, a masterpiece of Gothic architecture with a large 7,000-pipe organ, the construction of which took 150,000 hours. We also stopped at a quaint bakery for coffee and a treat next to the Old Town Hall.

After my visit, I returned to the hotel for a treatment at Spa Cinq Mondes, a leading luxury spa chain in Europe. I had a brief consultation with the masseuse prior to treatment to go over any health or wellness concerns and to choose the appropriate massage for my current condition. The toning Indian Ayurvedic massage was relaxing and the masseuse kneaded my tight and sore muscles (I walked for miles through Zurich for 2 days before arriving in Lausanne). Feeling good but a little exhausted after the massage, I curled up on a cozy lounge chair by the indoor pool in a thick terry bathrobe and finally read a long-neglected book that I had overlooked. had picked up months ago.

On my last morning before heading back to Paris, I went to the Olympic Museum, which is located right next to the hotel. Lausanne is home to the headquarters of the International Olympic Committee. The interactive museum, on three levels, offers a fascinating insight into the ancient and modern history of the games, the spirit and the competition, as well as the important role that the Olympics play on a global scale in alleviating the problems policies.

Pro tip: Check out the Lobby Floor gift and clothing store, which features stylish t-shirts, gadgets, and memorabilia from past Olympics.

A time of thanks | Local

How to find the Santa Rosa Blue Hole, a natural swimming pool